A rule can be applied to a Journey at a global level (Journey rule) or on individual steps (action rule). If globally, the Journey checks to see if the rule has been successful at least once during the entire Journey and is not applied to each step. If a rule is applied to a step, it is run only during the execution of that step. Anytime a rule fails in a Journey, its card will show an alert icon on its card.

Journey rules are applied to the entire Journey and need to execute only one time to be successful. Journey rules are not associated with any specific step because they are evaluated across the entire Journey. If the rule criteria are met at least once during the course of the Journey, the rule is successful. If the rule criteria is not met at any time during the Journey, the rule fails. Some rules may not be applied, based on the IF condition of the rule.

Click on Journey Rules in the left navigation bar to see which rules passed, failed, or were not applied.

Each global rule applied to the Journey will show with its status, Failing or Passing, as described below under Action Rules.

Rules for the actions are listed in the Rules tab. From here you can see which rules failed, did not apply or passed on that step.

Rules that have an If condition applied might not execute on the step on which it is applied. If a rule was not executed because the condition was not met, it will show that it was not applied and show which condition(s) were not met causing it to not be applied.

Passing rules were successful. These are the ones that were both executed and that found the results it was looking for. All the expected results must be met in order to pass; if any result does is not met, the entire rule fails.

The Journey report indicates failing rules with an alert flag. When you examine the report, you'll see the flag on the steps where the rule failed. Click on the thumbnail for the step and look on the rules tab to see what failed. 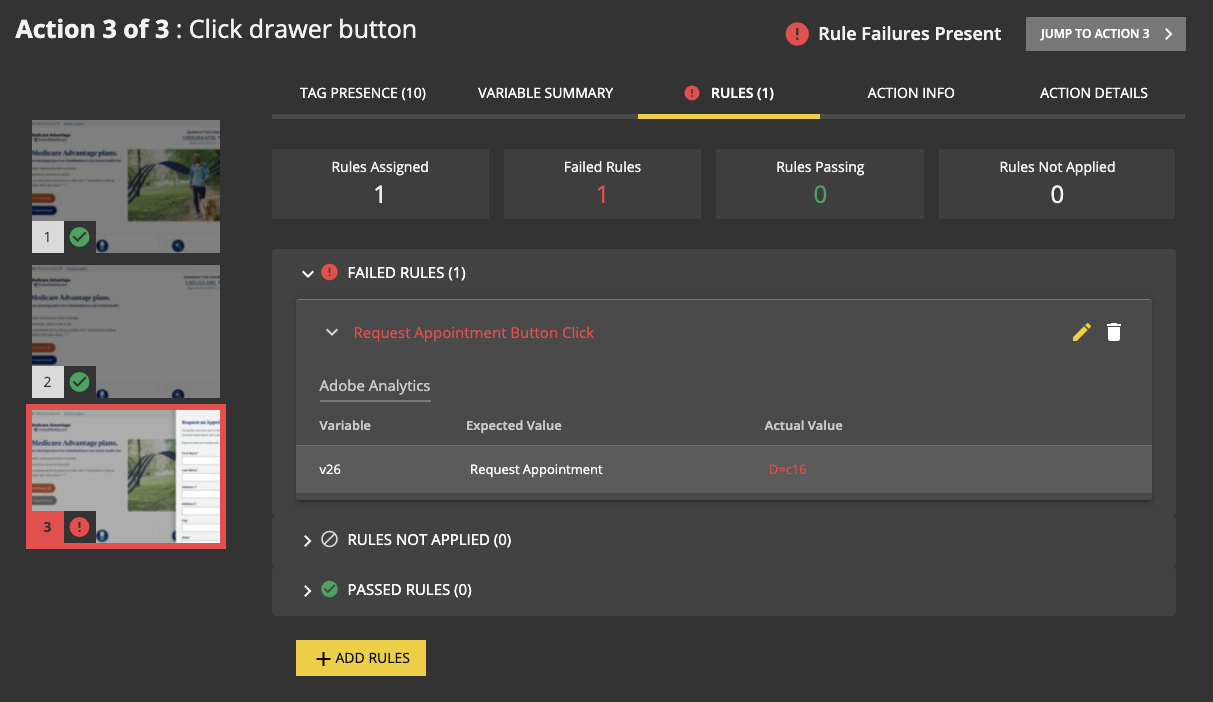 Click into the rule to see the failed result(s). If a rule has more than one expected result, only the ones that did not pass are shown, while the ones that succeeded are not listed. When any result in a rule fails, the entire rule fails. A result will fail when it doesn't have the expected value in the variable or because it cannot find the variable at all

Failed rules can be deleted or edited from this view. Additionally, if you would like the Actual Value to be the new Expected Value in your rule, you can simply hover the variable/value that failed and select the option "Set as expected value." The rule will be updated but the results and changes will not be reflected in the Journey report until after the Journey's next run.

Did this answer your question? Thanks for the feedback There was a problem submitting your feedback. Please try again later.